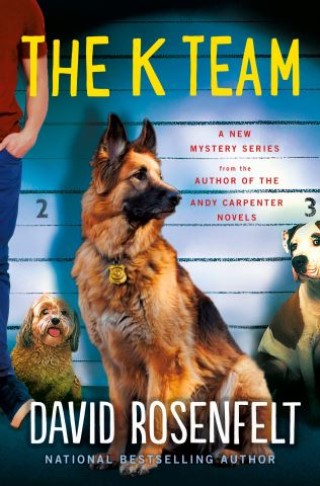 From bestselling mystery author David Rosenfelt comes a new series – a spinoff of the much beloved Andy Carpenter mysteries – about a dynamic new investigative team featuring a determined former cop and his loyal German Shepherd.

Corey Douglas and his K-9 partner, Simon Garfunkel, have recently retired from the police force. Not ready to give up the life yet, they come up with a proposal for fellow former cop, Laurie Carpenter, and her investigating partner, Marcus. Laurie and Marcus – who help out Laurie’s lawyer husband Andy on cases – have been chafing to jump back into investigating on their own, so they are in.

They call themselves the K Team, in honor of Simon. Their first job as private investigators comes to them from Judge Henry Henderson, who's known as a very tough but fair judge, and they've all come up against him in court at one time or another. Though it's hard to believe, Judge Henderson is being blackmailed and extorted, and he doesn't want to involve the police--he needs the K Team to figure out why.

David Rosenfelt: DAVID ROSENFELT is the Edgar-nominated and Shamus Award-winning author of more than a dozen Andy Carpenter novels, including One Dog Night, Collared, and Deck the Hounds; the Doug Brock thriller series, which starts with Fade to Black; and stand-alone thrillers including Heart of a Killer and On Borrowed Time. Rosenfelt and his wife live in Maine with an ever-changing pack of rescue dogs. Their epic cross-country move with the 25 of these dogs, culminating in the creation of the Tara Foundation, is chronicled in Dogtripping.